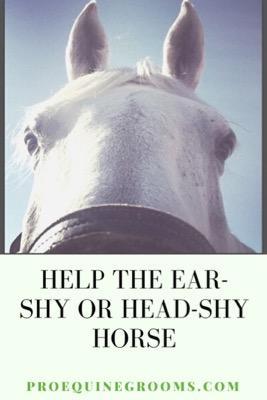 Can you touch both of your horse’s ears? And work around his face?  Working with the ear-shy horse or head-shy horse is frustrating and requires patience and time.  It’s well worth the effort when your horse trusts you.

Why are some horses head-shy?

More reasons a horse is ear-shy

These are smaller aural plaques in a horse’s ear.

Is your horse OK with some ear touching, but not all?

My point is this – if you are entrenched in the exact same way of doing things, he may be, too. Approach him from a different angle when you see him. Start grooming on the other side that you normally do. Vary up your routine. Change what you are wearing, where you groom him, etc. There are dozens and dozens of variables to explore.

There are many ways to desensitize your horse to handling.

There’s one example I see all the damn time that I understand, but wonder if it’s the best way. The horse that won’t load in the trailer. Some training techniques will have the horse work and move his feet and do lots of little circles around the trailer. His “reward” is going in the trailer so he doesn’t have to work.  How about just taking things step by step?

This little clicker was a lifesaver!

What does this have to do with the head-shy and ear-shy horse?

Some easy steps to work help your horse gain confidence.

This can be paired with counter-conditioning.

Once a horse figures out you are asking him for something, he becomes more trusting and willing about everything when he knows some positive feedback is his reward.

This article dives into some of the training names and lingo and provides some fantastic examples of training.

Have everyone at the barn halter your horse the same, safe way until you can figure out the ear thing. This usually involves looping the halter around the neck, instead of over the ears.

A few more critical notes about this, especially if you board and your horse is handled by others.

Shop for handy things here! As an Amazon Associate, I earn from qualifying purchases, this comes at no additional cost to you. This is such an easy way to help me keep this website up and running.