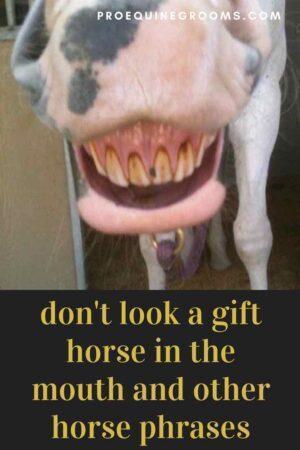 Hold your horses and more – the origins of famous horse phrases

Ever wonder where some of your favorite horse-related phrases came from? Wonder no more! I have answers.

Pee like a racehorse – Racehorses are sometimes given a diuretic, like furosemide, to help with potential pulmonary hemorrhaging. Diuretics also remove large amounts of water from the body, via urination. At some point, this phrase used to be “pee like a horse”, suggesting volume, and was later morphed to racehorse, suggestion volume and urgency. Who knows if the speed part of this phrase comes from racehorse being fast, or if the diuretics have anything to do with this at all.

Put the cart before the horses – Getting ahead of yourself and skipping steps! This phrase can characterize something that seems out of order. Allegedly, this phrase can be traced back to use in the 16th century during Renaissance times.

Don’t look a gift horse in the mouth – Basically, don’t question, second guess, or be ungrateful for a gift or good luck! It’s common to estimate a horse’s age by looking at his teeth, so this phrase speaks to guessing the quality of a gift, instead of just enjoying it. 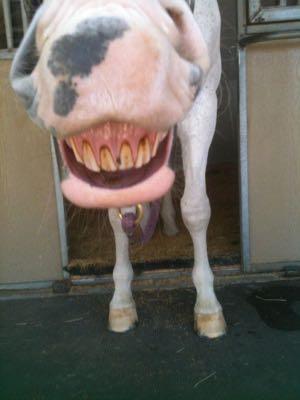 Get back on the horse – Also known as buck up, wipe the dust off, put on your big girl/boy undies. After hitting the dirt, buying real estate, having an unplanned dismount, looking down and going down, zigging when you should have zagged, or kissing the earth, it’s time to try again.

Don’t beat a dead horse – Your point is made, stop already. The common understanding is that this phrase came from the world of racing, where beating a horse would theoretically make him go faster. A dead horse isn’t going anywhere, just like your point. Move on.

Dark horse – the underdog that rises to the occasion and succeeds. It seems that in the 1800’s, a novel used this phrase in reference to an unknown horse who won a race. The phrase comes up in politics, as well as literature.

Get off of your high horse – Don’t be such a snob. High can be synonymous with power, and during medieval times, powerful soldiers and royalty would ride large and tall horses. This allowed them to look down upon the less powerful. Literally, down their noses.

Hold your horses – Wait just a dang minute. It’s as if you are trying to stop a stampede, which, doesn’t really seem like a smart thing to do. Interestingly enough (or not), this phrase comes from the US in the 1800’s, and was originally “hold your hosses”.

Straight from the horse’s mouth – Go right to the source. This phrase also originated in the US, in the 1900’s from the racetrack. It seems that grooms and stable workers had the best tips on who would win a race, and this was almost as good as getting a tip straight from the horse.

You can lead a horse to water, but you can’t make him drink – You can’t make anyone do something they don’t want to do. This phrase started out as “who can give water to the horse that will not drink of its own accord”, in 1175!! Over the years it’s been modernized, but it seems that horse people everywhere notice this phenomena.